Why recycling is not good enough

Recycling, a concept that has emerged in the 1980s is perceived by many as “that” solution for a greener environment. Other than one might expect, recycling is definitely not as good as most of us think.

Our perception about “waste” or rather “goods that we no longer use” has changed very much over the last four decades. Whereas it was still very common to simply “dump as waste” everything we no longer used in the 1970s, the term recycling widely introduced in the 1980 shifted the focus on “waste” as a burden away to something that could actually be used as a resource. Because the new concept recycling seemed to be the ultimate solution to waste generation it gave people the feeling that as long as we recycle, we could consume whatever we wanted. That was however wrong and the concept has very big limitations.

Recycling must not necessarily be sustainable. With resources use it is as with traffic (mentioned in another post): whereas public transport is definitely greener than using your private vehicle, the only sustainable modes of transport are walking or cycling. Most important: even better is staying at home.
Likewise recycling is only the preferred option over disposal, but not the ultimate answer to the question of resources use. Does this sound strange? Well, think about the energy necessary to recollect, clean, separate and eventually recycle goods and materials. Apart from the fact that not 100% of the recycled goods can be reintroduced into the production cycle, any sort of energy use comes at a cost, even if the source is a renewable one.

Addressing this issue and trying to “re-educate” the public, the US introduced the Three-R-Model “reduce, reuse, recycle” in their waste concept as early as the 1990s. The EU went a bit further when expanding this model to a five level hierarchy in its 2008 Waste Framework Directive: prevention, prepare for reuse, recycle, recover (e.g. extracting heat from waste) and disposal was the strategy there.
Unfortunately, also this model has come to an end; or so at least sees it Niall Enright, sustainability consultant from the UK. What he suggests is a waste (or nicer: resource efficiency) hierarchy  based again in the Rs, but this time with seven levels: remove, reduce, re-source, reuse, recycle, recover and return.

The strength of this concept is manifold. First of all there is a replacement of the term “disposal” for “return”. Other than critical readers might argue, it’s not simply a different word for the same action. The expression “returning” brings the focus to the fact that whatever we do with resources previously extracted from the environment we will eventually have to return them back to the same environment, unless we perpetually reuse them. In other words, rather than simply “disposing” of waste, we might want to bring it into a state that in turn allows nature to make use of it, for example in the form of nutrients or fertilizer. Where this is not possible, we might want to reconsider our production process, for example in the case of energy from nuclear power: unfortunately, those who praise nuclear power for its low CO2 impact, claiming it was a “green” source of energy, all too willingly forget that its waste is a hazard that will last for thousands of years.

Another and compared to the recycling concept of the 1980s probably the most obvious aspect of the new hierarchy is that recycling is now only level five, third last preferred option. Far better than recycling are “reusing” or “re-sourcing” (means the use of a substitute from an environmental-friendlier source). Even better, as already accounted for in the EU Waste Framework, is “reducing” waste generation, for example by better design. And best and hence on top of the pyramid is “removing”. With this additional level, Enright points at what I describe in the idea that “the most sustainable trip is the one you never do or did”; removing resources from being introduced into the production cycle in the first hand is definitely the most environmentally sound and hence, preferred option. 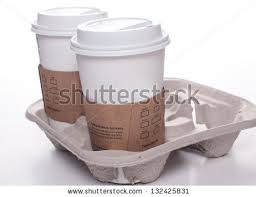 Two cups, two lids, two insulation bands and a tray for two coffees. Is all that waste really necessary for a two-sip-pleasure or would two cups also do? (Photo: shutterstock.com)

For many this might be common sense, for others “strange”. Until recently it wasn’t logic that we shouldn’t have everything we could afford. However, with an ever growing world population and ever more people sharing wealth, it becomes very obvious that resources are ending. Consumerism is the beginning of all evil; the more we consume the more waste we produce. Unfortunately, governments have not yet got the point. By trying to revitalize struggling economies with the simple idea of consumerism ever again, they do exactly the opposite of what the new waste strategy suggests. Not more consumption, better awareness is the base for success and a sustainable society.

There are so many things we don’t need and only by acknowledging that any form of production involves energy, that energy is never “totally sustainable”, and that sharing in a system with limited resources might mean that some will have to “reduce” consumption, will we be able to address the resources use and waste problem. Better than “recycling” is “not buying” or “not producing” goods in the first hand.

Born in 1973 in a small village in rural Switzerland and into a society largely dominated by cows (not only was the human population of one-hundred-and-forty outnumbered by them, but politics were driven by unreasonable subsidies for diary products) I was connected with nature from early age on. Observing nature on one hand and the deficiencies of a dysfunctional Swiss agricultural policy with farmers that had lost connection to the land that provided their income on the other, I soon started to question society and the meaning of life. Suffering also under a farcical public education I developed curiosity to discover on my own. That was how I soon learned that little of what I had been taught was true. Skepticism and interaction with people from for me new cultures fostered my interest for the world and eagerness to leave a life shaped by federalistic layman-ship. At the age of twenty-three I hit the road for the first time, an event that later translated into passion. Traveling between cultures has since become part of my life. At the age of thirty-three I finally realized my dream and did a degree in Environmental Engineering from which I graduated in 2009, only to leave Switzerland once more for my "real home" Spain. Unfortunately, the stay was a short one: a couple of months later I was offered a job in Southeast Asia, where I have worked and lived until 2017 before returning to Europe, and finally again to Spain in 2019. My journey through different countries and cultures has taught me that regardless of how different our thinking and values are, no matter what approaches we take, we all can learn from each other. And if we are open enough to see the common instead of pointing out the differences, then we have a chance to live in harmony and peace: Life is all about integration, not exclusion!
View all posts by blaubear →
This entry was posted in Uncategorized and tagged awareness, climate change, environment, knowledge, Low-carbon economy, recycling, resource use, resources, Sustainability, waste, waste concept, waste generation. Bookmark the permalink.

6 Responses to Why recycling is not good enough

Reports from my somewhat unusual life

ExMachinaSomnium: From the Machine Dream

One Australian's thoughts on issues of urban planning, public policy, technology, and other miscellaneous musings.

living well off the beaten path

Geography is always on the move, so let's catch up with it!

If only everything could be so sensible...

Advancing the Field of Environmental Ethics and Philosophy since 1990

After a near fatal cycling accident with a semi-trailer in 2007 and a life-changing period of recovery, reflection, and inspiration, Michael Hall was determined to tackle one of the biggest challenges the world faces today: climate change. This is a photographer's journey to open eyes, change minds and inspire action. This blog is part of Michael Hall’s Creative Fellowship at The Climate Institute.

Ideas for a greener environment, a fairer society and a future driven by sustainability